People ask us all the time to explain our unusual name, and boy do we get some strange theories.  Most people think it has to do with foot washing, and we even had someone think we believed that Christ only washed ten disciples’ feet.  Nope, no weird doctrine here…just really cool railroad history.  Read on…

In the early 1800’s travel and trade was done by Conestoga wagons. This was the best means of transportation at that time. It took 23 days to get from Philadelphia to Pittsburgh, when the dirt roads were in good condition.

In the mid-1820’s the state of New York built a canal system which let trade become more efficient. This was known as the Erie Canal. Pennsylvania’s business in trading relations dropped and plans began for building their own canal system. In February 1826, the Mainline of Public Works was authorized by the Pennsylvania legislature to begin the building of canals from Philadelphia to Pittsburgh. There was only one problem with the building of the canals: the Allegheny Mountains.

The first plan was to build a four mile tunnel through the bottom of the mountain, but this was found costly and unrealistic. Tunnel building was new and it was questionable if water could be kept in the tunnel. It was decided to build a railroad system of ten inclined planes, 5 ascending and 5 descending. This system was modeled after a similar system in England.

The railroad was equipped with ten incline planes, five on each side of the mountain. At the head of each inclined plane were stationary engines, which moved endless ropes to pull the railroad cars up the mountain. This incline system was used because the locomotives of this time did not have the power to pull the cars up the steep mountains. The canal system cut the trip from Philadelphia to Pittsburgh down from 23 days to 4 days.

A little village was settled at the “foot” “of” the number “ten” incline, and it is still known as the Foot of Ten area of Duncansville.  Since our church was built in that village, the name was adopted as well.  See, nothing weird…just history. 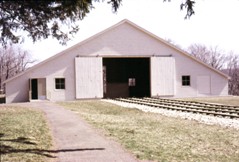